Saved Searches Advanced Search
UPDATE: The Indianapolis Public Library closure is extended until further notice. Read more
Materials are not due and fines will not accrue until after the Library closure ends. Read more 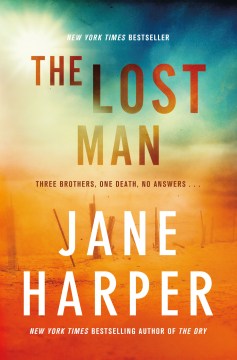 I thought it was very average. I have read worse but it is no Stieg Larrson/Lisabeth Salander for sure. It was interesting to read about the terrain/geography of the Outback.

This book was refreshingly wonderful - one of those books where you go back and re-read sections so that you can absorb it again and admire the layout of the clues. As others have said it set in a fantastically different landscape, you feel you are there appreciating and shivering at the other-worldly nature of the setting and the sinister developments. Keeps you guessing but not getting angry while waiting for the conclusion.

I would put this as the BEST BOOK I've read in years (I read about one every two days). Yes, it is slow-paced, but that's what life in the outback is like. It is extremely gripping however... and with enough twists to keep you at the edge of your seat all the way to the end.

I would give this TEN stars if I could.

A great mystery. Also about family dynamics. Her best so far.

Once again in Harper, extreme Australia provides powerful atmosphere in this story about the mysterious death of the main character's brother--the favorite son. But who was the dead man, really? Disfunctional family drama in the outback.

This is the story of three brothers who live in an unforgiving place. Where you don't dare leave home without a radio, a fully stocked cooler, spare tires, and a can of gas. Where a wrong turn can end in tragedy and your only hope for help is over 3 hours away.

Why would a man leave his air-conditioned car, walk 9 kilometers in the heat, and allow himself to succumb to dehydration? As the mystery unfolds, you can feel your mouth go dry with every turn of the page as you are led further down a very dark and twisted road.

Jane Harper's description of the outback is so vivid, you can feel the sandy grit on your skin and find yourself needing a cool drink. This is my favorite of the three books she's written and I look forward to more.

Loved this book. Jane Harper is definitely one of the best new authors out today.

An interesting family saga in an interesting isolated location in Australia. But the story took too long to unfold for me and was ultimately disappointing.

The blazing hot Australian Outback. One brother dead. One brother found him. The final brother is determined to figure out what killed him. Loneliness? Mental illness? The call of the empty, vast desert? Or something more disturbing? Harper's harsh landscape and tough ranchers hooked me from the start. This is a great summer read with a glass of cool lemonade at hand.

Australian back country mystery. Another Jane Harper thriller. Not quite as good as the Dry, but well worth my time reading.
Suggest Dry for book club rather than this.

Nathan and Bub, brothers, have just learned their middle brother is dead. Cameron, an experienced rancher in outback Australia, wandered away from his vehicle to “the stockman’s grave” and died due to the elements. Why would he do this when his 4x4 was working fine, and loaded with a survival kit? It makes no sense...

As the investigation into Cameron’s death progresses, we are exposed to more of just what has been going on in this harsh, dusty yet beautiful part of Queensland. Nathan’s perspective is the main one, and we learn of his troubled divorce, custody battle and a few other secrets as well. What happened to break this family apart? What could have caused Cameron, this brother/father/husband, to make such a deadly mistake when he definitely knew better? Or is there more to this story than first appears?

Pros: Wonderfully descriptive writing, and a great assortment of well developed characters. Coupled with a setting that was like another character...I could taste the dust, feel the loneliness and appreciate the beauty...this is a great book. And the ending is perfect.

Cons: The Lost Man was always alluding to something, but never saying it outright. I found it a bit slow in the beginning...but the second half of this book more than makes up for it.

The Lost Man just might be the best by Harper so far. Initially I found this one a little slow to get into, but after a few chapters I was completely hooked on the family secrets of the Bright family. This is definitely not your typical mystery, since the investigation into Cam Bright's death is unofficial. But readers who enjoy family drama and character driven mysteries will enjoy this atmospheric novel. If you have any interest in Australian, Harper does an amazing job of conveying the harsh realities of life in the outback.

I suspect the author or publisher Americanized the text. Australians who live in the outback drive utes, not cars. Ute: "A small vehicle based on the same platform as a family car but with a unibody construction and a built-in open tray area for carrying goods; similar but not identical to a pick-up truck." https://en.wiktionary.org/wiki/ute "Ute" isn't there, while "utes" appears 2 times in the American edition, evidently someone missed out on the plural; "car" is there a whopping 133 times. Not a big deal, just culturally wrong.

This was the best of the three I have read by this author. This murder mystery isn't really a page turner. I found it a bit slow but it was so worth it. A great story.

A New & Noteworthy pick. Two brothers meet at the remote fence line separating their cattle ranches in the lonely outback of Australia. The third brother lies dead at their feet. Another hit for Jane Harper!

In Harper's third book, a standalone, we meet the Bright family, who own a large amount of land deep in the Queensland outback. The Brights have three sons, Nathan, Cameron, and Bub, and when Cameron is discovered dead at a local landmark, questions arise, with really only the family to uncover the answers.

Harper is phenomenal at capturing bone-deep loneliness, and in evoking the outback landscape. A stunning book.