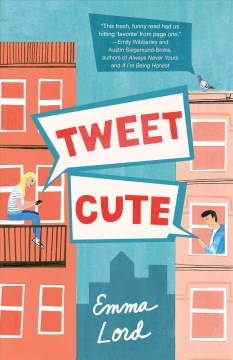 Baker & Taylor
A reimagining of You’ve Got Mail follows the unlikely romance between an overachiever from a successful family and the class clown, who exchange snarky tweets that escalate into a viral Twitter war. A first novel. Simultaneous eBook.

"A witty rom-com reinvention … with deeply relatable insights on family pressure and growing up.” - Emily Wibberley and Austin Siegemund-Broka, authors of Always Never Yours and If I’m Being Honest

“An adorable debut that updates a classic romantic trope with a buzzy twist." - Jenn Bennett, author of Alex, Approximately and Serious Moonlight

A fresh, irresistible rom-com from debut author Emma Lord about the chances we take, the paths life can lead us on, and how love can be found in the opposite place you expected.

Enter Jack, class clown and constant thorn in Pepper’s side. When he isn’t trying to duck out of his obscenely popular twin’s shadow, he’s busy working in his family’s deli. His relationship with the business that holds his future might be love/hate, but when Big League Burger steals his grandma’s iconic grilled cheese recipe, he’ll do whatever it takes to take them down, one tweet at a time.

All’s fair in love and cheese — that is, until Pepper and Jack’s spat turns into a viral Twitter war. Little do they know, while they’re publicly duking it out with snarky memes and retweet battles, they’re also falling for each other in real life — on an anonymous chat app Jack built.

As their relationship deepens and their online shenanigans escalate — people on the internet are shipping them?? — their battle gets more and more personal, until even these two rivals can’t ignore they were destined for the most unexpected, awkward, all-the-feels romance that neither of them expected.

This was a highly enjoyable read – gripping and un-put-downable. A social media war between two teen rivals that manage their families’ respective businesses, this book was a fun riot! A very well-written book with a great story, I would highly recommend this book.

This was an IMMENSELY cute romance!! I hated putting it down ... and when I did have to, I found myself still thinking about the characters and the story! This novel is smart and sassy and realistic. Pepper and Jack are amazing characters. Really kicking myself for not getting to this one sooner.

Cute story about two teens both responsible for their respective family businesses Twitter accounts who cross path IRL and coincidentally in the Twitterverse. Shade is thrown. A Twitter war begins. A romance blossoms. An entry into the “you're so cute I find you annoying” category of romances. Considering that the MCs are seniors in HS, the language, sexual content, and partying are mild.

4.5 stars for this twitter-centered remake of one of my favorite movies of all time -- "You've Got Mail." I have read other books that made the attempt, but Emma Lord manages to nail it! Those who have not seen the movie multiple times might not realize the little things that perfectly correspond with the Meg Ryan/Tom Hanks rom-com. The addition of the dessert mashups had me wishing there were some recipes included, too. Hurray for PepperJack! Clever and captivating. Well done.

A Must-Read Young Adult pick. A fun, lighthearted rom-com to start the New Year off right! You’ll fall in love with Pepper and Jack and their cheeseburger recipe rivalry.

I adored this book. I'm not typically into sweet teen romances. I prefer something with a little more edge and danger, but this book was adorable. I totally shipped the characters. They are quirky without being over the top, and I loved the friendship that builds between the duo before the romance eventually blooms. This book is perfect for fans of Jenny Han's To All the Boys I've Loved Before and like Han's novel, it would make a great little movie! Fingers crossed on that one!

Warning: Do not read while hungry because Tweet Cute has some seriously scrumptious depictions of yummy delights.