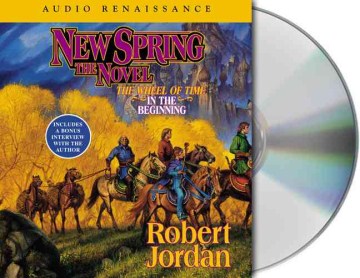 As a prequel to the Wheel of Time Series, this book was helpful in getting me to understand the 'universe' and get a feel for some of the characters.
I felt that this book was definitely interesting, but I thought that there were a lot of parts that could have been either changed or left out. It ocasionally felt a little long, and the transitions between different scenes sometimes felt rushed and unclear.
But, the ending of this book was definitely really good and it left me excited to read The Eye of The World. The best thing about this book was that there are no bad words.

I have a confession to make - I didn't read this in the correct order. New Spring is part of Jordan's "Wheel of Time" series; it's a prequel that takes place about 20 years before the events of the first book in the series. New Spring was written originally as a novella, published in an anthology of new works written by several masters of the fantasy genre. The anthology came out between books 8 and 9 of the "Wheel of Time" series; Jordan later expanded the novella into a full novel, which came out between books 10 and 11 of the series.

As I said, the events in New Spring take place about 20 years before the events of the first book in the main series. Moiraine and Siuan, both apprentices to the Aes Sedai, a group of sorceresses, overhear a prophecy of the rebirth of the "Dragon", a hero who will save the world from the "Dark One". Once they become full members of the Aes Sedai, Moiraine and Siuan begin searching for the Dragon, to protect him from the followers of the Dark One. Moiraine also meets up with Lan Mandragoran, a soldier who will become her Warder, a warrior who is bonded to serve her.

It's difficult to talk about the "Wheel of Time" series without explaining such terms as Aes Sedai, Warder, and Dragon". It also made reading this book a little slow going at first. While the book is a prequel to the events of the series, it assumes a familiarity with the world of the series, since it was published after 8 of the series' volumes. But there is a small glossary at the back of the book, and once I began to remember what the new words meant, the book became a lot more enjoyable. I'm a big fan of multi-volume works like the Lord of the Rings trilogy, the Harry Potter books, and Christopher Paolini's "Eragon" series. My only concern is when a writer drags things on without ever resolving anything, seemingly just to make a few more bucks off the fans. I've had several friends say they stopped reading the "Wheel of Time" series for just that reason - that it seemed like some volumes in the series weren't really moving the story forward. But I enjoyed this book so much that I think at the least I'll read one or two more volumes in the series to see how things go, before giving up on this story.

I liked this book because it revealed what the White Tower was like before everything else happened. To be honest, I found the beginning a bit slow and hard to get into, but once it got a bit farther, I became more interested. There's a lot about the friendship between Moiraine and Siuan, and you also get to see more of Lan's emotions. I recommend it if you already like the Wheel of Time series. I read this one years after I finished the series multiple times.

While it was interesting learning more back story on Moiraine and Lan, the novel didn't quite reach the standard held by the rest of The Wheel of Time. Worth a read if you're an avid fan of the universe, but unnecessary for casual fans.

I love this series. This book though, is really the 1st book in the series even though it doesn't say that and it was published near the last quarter of the series. It is mainly all about Moiraine with a little bit about Lan and how the two got together. I was expecting to be reading the next in the series when I got this book (next would be book 11; Knife of Dreams) but it's as if he stopped telling the story and went back to the beginning. I didn't like this book and I learned very little more about the character Moiraine. I learned a little bit more about Lan but not much. If you're reading the series already, you could skip this book if you'd like. The series is good but sometimes the author takes too long to get things moving.

I didn't like this book. The plot was slow and not particularly interesting, and I don't think it added much to the series.

Should have focused more on al-lan mandragoran, love that man.

Might have been better left as a short story as there isn't enough plot to sustain an entire book.

I read this book first before I started reading the rest of the series and I really enjoyed seeing Morraine and LAN in a more relaxed setting and in their younger years. It really made me appreciate the characters a lot more as I progressed through the series.

LAN: "Where do we ride first?"
MOIRANE: "Back to Chachin, and then Arafel, and...the world, if need be. We win this battle, or the world dies."

"You said you burned your past. Let the past have its ashes. This is the same war, Lan. The most important battle yet in the war. And this one, you can win." -Moirane

"My father used to say, 'Change what you can if it needs changing, but learn to live with what you can't change.'" -Siuan

SUMMARY FROM WIKIPEDIA:
New Spring describes events which take place twenty years before the events of The Eye of the World (Book 1). The story begins in the last days of the Aiel War, and the Battle of the Shining Walls around Tar Valon. It is set primarily in Tar Valon and the Borderlands, specifically Kandor.
New Spring focuses mainly on Moiraine Damodred and Siuan Sanche, two Aes Sedai new to the sisterhood, and how a young Moiraine became Aes Sedai, met Lan Mandragoran and made him her Warder. The novel also explains how Moiraine and Siuan witnessed a prophecy of the Dragon's rebirth and came to begin investigating the Karaethon Cycle, the Prophecies of the Dragon, decades before discovering Rand al'Thor.

Prequel to the Wheel of Time Series. This is the story of Morraine and Lan's meeting.

Chinderixx thinks this title is suitable for 16 years and over