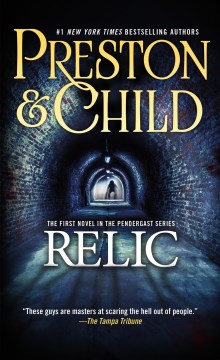 In our first introduction to Agent Pendergast of the FBI, we find him insinuating himself into the stalled investigation of a series of murders in New Yorks Natural History Museum. Brutal, savage, and seemingly without a sane explanation, these attacks lead to a story that will have you on the edge of your seat.

Preston and Child team up to write a series of books with a common main character. Titles can be read out of order at the start of the series, but readers may find earlier stories spoiled slightly if they start at the end. Relic is the first in the series.

Relic is where the Pendergast series begins. An intriguing page turning series that is now 15 books long, and continuing, that will keep you up late but perhaps not willing to turn the lights off.
Preston and Child are an incredible writing team! Preston, having studied anthropology and English Literature and working in museums for 8 years, wrote "Dinosaurs in the Attic." Child, who edited the book, was taken on a night tour to The American Museum of Natural History in New York and commented it would be a wonderful setting for a novel and thus Relic was born!

Who will love this?
Fans of Michael Crichton or Matthew Reilly will love the thrilling and intelligent storyline. Lovers of Museums, science and eccentric and erudite characters will eagerly request "Reliquary", book 2. Pendergast is an intriguing character, a modern day Sherlock Holmes. (If Sherlock holmes had grown up in a wealthy New Orleans family plagued by mental health issues.) Arthur Conan Doyle and Sherlock Holmes are actually mentioned later in the book series.

If you don't like the Medical science or monster feel to the first two books, I recommend you persevere as the series moves on and takes you on an incredibly intriguing and clever journey with many other intriguing characters you will love and hate!

I saw this movie years ago and it was in my head again recently so I just read the book. Wow! It was great. It was so suspenseful and pretty different from the movie. I want to read the rest of the series now.

* update *
Its movie version introduced me to the books by collaborative authors Douglas Preston and Lincoln Child. It is the first in the very special Special Agent Pendergast series with the latest White Fire (2013) and Blue Labyrinth (2014). The 15th of the series is coming soon: Crimson Shore scheduled for release on November 10, 2015,

Woah! Its been awhile since I have read such a nail-biter! Fans of Michael Crichton, by all means pick up this science based techno thriller! The book starts off with an expedition, known as the Whittlesey expedition. Anyway, the expedition's goal was to get artifacts from an extinct tribe. However, the tribe believed in some cult about a beast, "He Who Walks On All Fours" This beast cannot be killed and haunts this tribe. The expedition finds out that this tribe is actually not extinct when they find an old woman. The woman screams at them "Mbwun! Mbwun! You take Mbwun! He kill your people!" It happens to be that Whittlesey had taken a holy artifact of the beast. It was a figurine with the monster on the top. This was to go on display at the biggest museum in the world. The crates that contained this artifact was shipped off to New York. Whittlesey and his fellow explorers did not have a happy ending. They were ripped to shreds graphically by a mysterious force. Anyway, this relic is at the museum on display in a room that is not yet open. It opens to five thousand guests in just two weeks. Its to be an exhibit called "Superstition" a horror exhibit. However, in the museum's dark corridors, there are savage murders. The victims are ripped to shreds and have their brains extracted violently. Very similar to how Whittlesey had met his end. Despite the murders, the greedy museum directer proceeds to have "Superstition" open on schedule. The FBI gets involved. SWAT comes in the end. There are loads of suspense and nail biting action. This book will keep you turning the pages late at night. Oh, I don't recommend to the sensitive. This book leaves no room for the squeamish! Happy Reading!

The first book in one of my all-time favorite mystery series. Pendergast is a singular character, unlike any I have encountered in other works. The New York Museum of Natural History is a character in itself in this series, gothic and creepy. The book is way better than the made-forTV movie so check it out!

This is the second time I read this book. The first time was several years ago. Still exciting, a fast read, and with a fun plot. The characters lack depth and credibility but I had forgotten this was an introduction to the unforgettable Agent Pendergast

I loved it. Couldn't put it down.
Was kind of disappointed by the sequel.

The organ of interest:
“What’s that?” asked D’Agosta. He willed himself to look more closely. The brain, sitting in a stainless-steel pan, looked a hell of a lot more liquid than solid. He turned away. Baseball. Think about baseball. A pitch, the sound of a bat ... “The thalamus and the hypothalamus. The body’s regulator.” “The body’s regulator,” repeated D’Agosta. “The hypothalamus regulates body temperature, blood pressure, heartbeat, and the metabolism of fats and carbohydrates. Also the sleep-wake cycle. We think it holds the centers of pleasure and pain. It’s a very complicated organ, Lieutenant.” She looked fixedly at him, anticipating a question. D’Agosta mumbled dutifully, “How does it do all that?” “Hormones. It secretes hundreds of regulatory hormones into the brain and bloodstream.”

More genetics from Epilogue such as this insight that is sort of coming true( http://www.npr.org/sections/health-shots/2015/08/14/432192398/engineers-make-narcotics-with-yeast-is-home-brewed-heroin-next ):
:
The possibilities for genetic engineering were endless. And already, Kawakita had ideas for improvements. New genes the reovirus could insert into its host. Human genes as well as animal genes. He controlled what genes the reovirus would insert into its host. He controlled what the host would become. Unlike the primitive, superstitious Kothoga, he was in control—through science.
An interesting side effect of the plant was its narcotic effect: a wonderful, “clean” rush, without the unpleasant down of so many other drugs. Perhaps that was how the plant had originally ensured its own ingestion and, thus, its propagation. But for Kawakita, this side effect had provided cash from which to finance his research.

D’Agosta heard a low, mellifluous voice behind him. “Who the hell are you?” he said, turning to see a tall, slender man, wearing a crisp black suit, leaning against the top of the stairwell. Hair so blond it was almost white was brushed straight back above pale blue eyes. “The undertaker?” “Pendergast,” the man said, stepping down and holding out his hand. The photographer, cradling his equipment, pushed past him. “Well, Pendergast, you better have a good reason to be here, otherwise—” Pendergast smiled. “Special Agent Pendergast.” “Oh. FBI? Funny, why aren’t I surprised? Well, how-do, Pendergast. Why the hell don’t you guys phone   ahead? Listen, I got a headless, de-brained stiff down there. Where’re the rest of you, anyway?” Pendergast withdrew his hand. “There’s just me, I’m afraid.” “What? Don’t kid me. You guys always travel around in packs.”

Lizard DNA and human DNA in the same sample? But this wasn’t the first time something like this had happened. You couldn’t blame the computer, really. It was an inexact procedure, and only the smallest fractions of the DNA sequences of any given organism were known. He scanned down the printed list. Less than 50 percent of the matches were human—a very low proportion, assuming the subject was human, but not out of the question in a degraded sample. And there was always the   possibility of contamination. A stray cell or two could ruin an entire run. ...

Frightening or Intense Scenes: One of the most intense books I have ever read!

Coarse Language: F*** is used very frequently in the second half of the novel. It is used aggressively with its variations: Mother****** ect... Additionally, there are uses of D**k, S**t, son of a B**** and much more.

Violence: Let me start off by saying that this is the most violent book I have ever read. Many people are ripped apart. Their brains and organs are splattered everywhere. The book describes every single graphic detail. Very disturbing scenes. Two of the murders was two little kids. There is a disgusting autopsy scene. Additionally, people are crushed, trampled, kicked around ect...

JihadiConservative thinks this title is suitable for 15 years and over