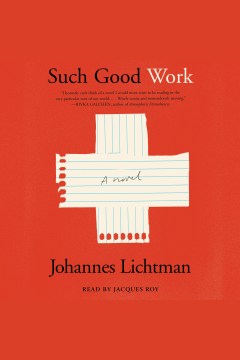 A timely and provocative debut novel that Rivka Galchen calls “wisely comic and tremendously moving”, about a creative writing teacher whose efforts to stay sober land him in Malmö, Sweden, where drugs are scarce but the refugee crisis forces a very different kind of reckoning.

Jonas Anderson might be an excellent teacher if he weren’t addicted to drugs. Instead, at age 28, he’s been fired from yet another creative writing position after assigning homework like visit a stranger’s funeral and write about it.

Jonas needs to do something drastic and, as a dual American-Swedish citizen, he knows Sweden is an easy place to be a graduate student and a difficult place to be a drug addict. The year is 2015 when he arrives in Malmö, a city trying to cope with the arrival of tens of thousands of Middle Eastern refugees. Driven by an existential need to “do good”, Jonas volunteers with an organization that teaches Swedish to the desperate and idling young refugees. But one young man, Aziz, will force Jonas to question whether “doing good” can actually help another person.

Such Good Work is a darkly funny work of autofiction that asks us to consider how one should go about being a good person in our modern world. In his striking debut novel, Johannes Lichtman’s uses pathos and humor to grapple with simple yet necessary questions — Such Good Work begs you to consider the person you are, as well as the person you hope to be.

Simon and Schuster
From Johannes Lichtman comes a wisely comic debut novel about a teacher whose efforts to stay sober land him in Sweden, but the refugee crisis forces a very different kind of reckoning.

You don’t have to be perfect to do good.

He’s made plenty of bad decisions in his life, and at age twenty-eight he’s been fired from yet another teaching position after assigning homework like, Attend a stranger’s funeral and write about it. But, he’s sure a move to Sweden, the country of his mother’s birth, will be just the thing to kick-start a new and improved—and newly sober—Jonas.

When he arrives in Malmo in 2015, the city is struggling with the influx of tens of thousands of Middle Eastern refugees. Driven by an existential need to “do good,” Jonas begins volunteering with an organization that teaches Swedish to young migrants. The connections he makes there, and one student in particular, might send him down the right path toward fulfillment—if he could just get out of his own way.

“Such Good Work is, indeed, a bit Jonas-like: it's wary of affectation or grandstanding; it works small, as if from a sense of modesty, a reluctance to presume; it cuts sincerity with the driest of humor” (The New Yorker). In his debut, Lichtman, “a remarkable thinker and social satirist” (New York Times Book Review), spins a darkly comic story, brought to life with wry observations and searing questions about our modern world, and told with equal measures of grace and wit.