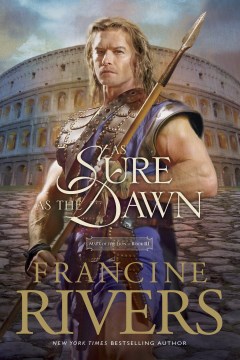 As Sure as the Dawn

Baker & Taylor
When gladiator Atretes locates his missing son, his plans to return to Germania are upset by Rizpah, the young widow who adopted his abandoned baby and who will fight to keep the child she loves

Tyndale
A classic series that has inspired millions of readers worldwide!

From the New York Times bestselling author of Redeeming Love and A Voice in the Wind comes the thrilling conclusion to the Mark of the Lion series.

With Hadassah confined to the cells below the arena, facing death once again, and his sister Julia dying of a strange new illness and longing for a forgiveness beyond her reach, Marcus goes in search of God. Meanwhile, Atretes, the Germanic warrior, vows to move heaven and earth to find his son—the baby he thought was dead and whose life Hadassah saved—and take him back to Germania. Only one thing stands in his way: Rizpah, a Christian widow who has cared for the baby since his birth. Atretes did not count on Rizpah’s fiery resistance to having “her son” taken away, nor is he prepared for the woman’s strength and beauty. From their first meeting, the two are caught in a stormy battle of wills.

This edition includes a foreword from the publisher, a preface from Francine Rivers, and discussion questions suitable for personal and group use.

All I can say is WOW!!! This book held me in rapt attention the entire time! I could not put it down, and contrary to the first two books, it was full of life and excitement on every single page!!! Even though the first two books are a little slower and a little darker, it's still worth reading them in order to read this one!!!

I’ve read both of these books, and I’m very excited to read this third one!

Francine Rivers is an amazing author!

I’d recommend her to an atheist, all the Way to a Christian!

Please read all of her books!

The book starts out very well, with a slowly growing bond forming between the vengeful former gladiator Atretes and the Christian widow Rizpah. It's addictive and passionate and beautifully written. But the moment Atretes, Rizpah, Caleb, and Theophilus step into Chatti territory, everything gets a bit less amazing. It's a bit unrealistic and preachy, and Anomia makes no sense whatsoever. I still love this threequel, but it's not quite as good as the first and second books. The characters were fantastic (excepting the aforementioned Anomia) and the plot twisted and turned. It was a mature, intense ride, albeit a bit overlong.

Absolutely wonderful book! The main character is such an inspiration to live a more godly life.

"As Sure as the Dawn" is packed full of scripture, romance, and action!

The last book in the Mark of the Lion series is another book that left me feeling uplifted.

good, but sad and tearful book!!

Personally, i love this entire series. i for one find it difficult to find good books. when i do-and i know it when i do-i can't ever put them down! this series was no different. i loved it

This is a story of an ex gladiator as he struggles with the flesh and with God. The other main character is a young widow who has a strong faith in the lord. Very interesting book, extremely hard to put down. I suggest it to anyone who enjoy's inspirational romance books.

Fabulous read. I love this series

burgundy_deer_45 thinks this title is suitable for 11 years and over

Gwen904 thinks this title is suitable for 15 years and over

Tjad2LT thinks this title is suitable for 18 years and over

blue_crab_444 thinks this title is suitable for 11 years and over

banana197 thinks this title is suitable for 14 years and over

Coarse Language: One or two uses of damned. One character swears "under his breath" quite a bit, but no words are actually used.

Violence: Arguments with pushing and shoving. Several murders with descriptions of snapping necks, stabbing, blood, etc. A few references to one character being forced to fight in the arena for years. Some barbarian religious rites mentioned, including sacrifices (both animal and human), blood-letting, and dancing naked over the emblems of a pagan god. Drowning in a bog is referenced multiple times.

Sexual Content: Several instances of nudity, but mostly in a nonsexual way. Some talk of prostitution, sex, desire, adultery, lust, and rape. One character confesses to having sold her body for money. Another character remembers all the times he slept with other women. There are intense feelings of lust. One scene where a married couple has sex, but it is not described in any way.

The final book, this one follows Atretes. As he finds the son he thought he lost, he finds he cannot shake off the babe's adopted mother. As he travels with the baby, his adopted mother Rizpah, and Rizpah's friend, a roman centurian, to his homeland, he bonds with Rizpah. When they arrive at his home, atretes (SPOILER ALERT) must lead his people to Christ with his new found faith, and his new wife, Rizpah.

Loading...
IndyPL owns a similar edition of this title.